Eric Rodez in Ambonnay is a true artisan of his trade. He speaks of the 5 dimensions of champagne that shape its style and character:
1. Cépage:- Chardonnay, Pinot Noir or Pinot Meunier – the grape varieties play a major role of course.
2. Location:- Montagne de Reims, Marne Valley, Cote des Blancs – soil characteristics have a major effect and are very important.
3. Specific vineyard location – mid-slope – flat plain – top of the hill – south facing. Very important in determining grape quality. If there was ever a re-classification of vineyards in the Champagne region, then mid-slope vineyards would generally rate higher in quality, much like in Burgundy. Vine age of course plays a major role.
4. Vinification: Enamel tank, stainless steel, small oak, large oak, egg shape etc. Subtleties and nuances are created here. In this regard we see Eric doing more and more vinification in barrel and less in tank.
5. Fermentation: Malolactic allowed or blocked. Structure, finesse, minerality and acidity may be enhanced. The more barrel that Eric uses, the more he blocks the malo-lactic fermentation. 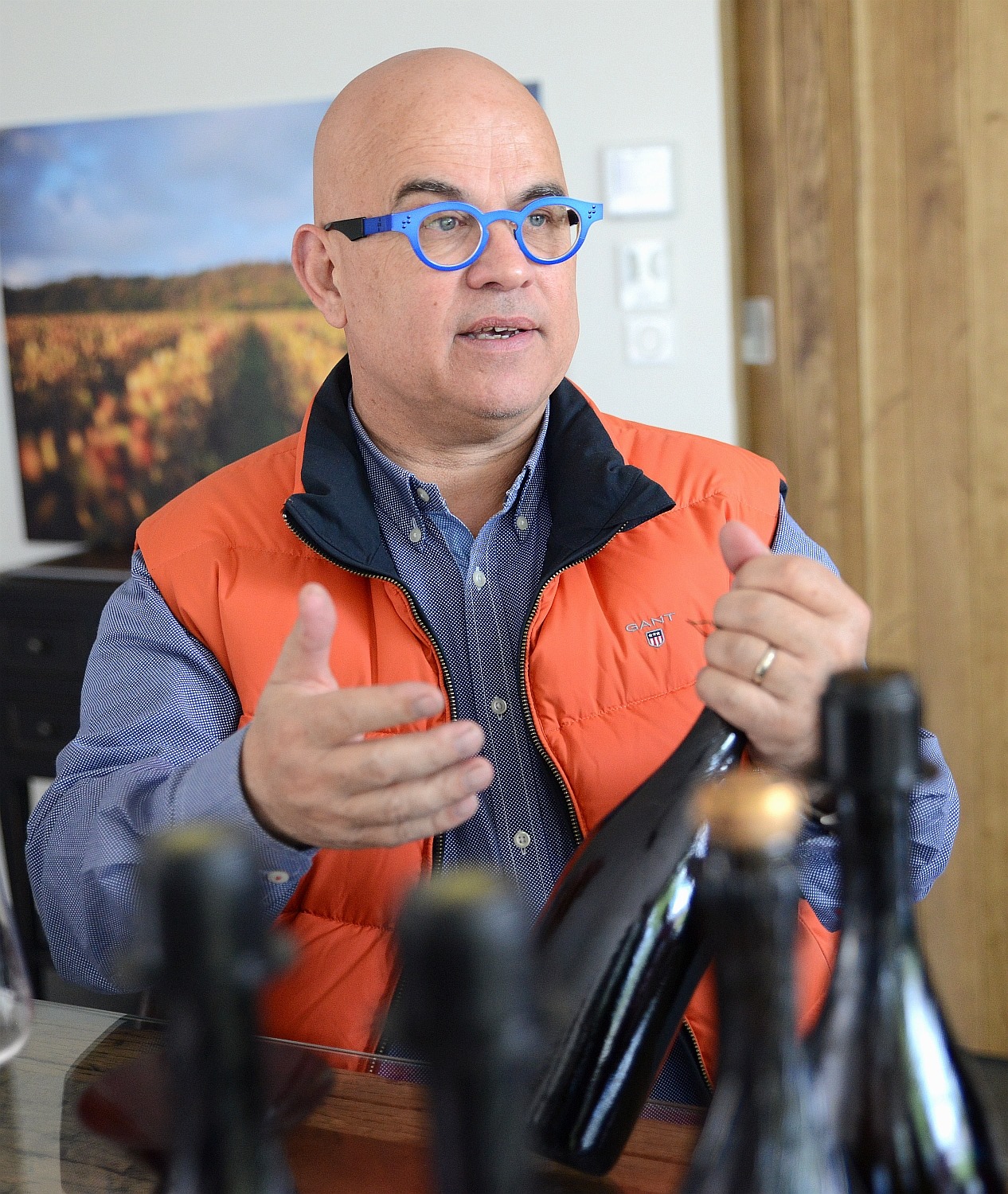 All the above combined, determine the style and quality of the final result. He has lots of old vines all with premium exposure at mid-slope. Subtle use of oak and control of malolactic fermentation along with a large stock of reserve wines allows Eric to create a brilliant range of terroir driven champagnes. His 7 ha property is divided into 35 plots of only Grand Cru vines split roughly 55/45 Pinot Noir and Chardonnay. Farming is ecologically sympathetic and Eric has been biodynamic certified since 2008. Eric’s conversion to bio-dynamic viticulture is not an easy process. His huge cache of reserve wines means that it will take Eric a few years before his ‘best quality’, newer reserve wines  make up 100% of his blended champagnes.

He worked in Burgundy, Beaujolais and the Rhone for three years during his youth, and also worked for a year at Krug. Dosages are light and he uses RCGM not sugar. He does not use any fertilisers, herbicides or insecticides. And yes, like all villages in France, some one as to be the mayor of Ambonnay. Since 2006 Eric has been using essential oils as part of his vineyard treatments, something he learnt from his grandmother. During the twelve years that I have been visiting and promoting Eric’s champagnes I have seen a subtle but concentrated and determined shift in his thinking. Reserve wines appear more precise. Dosages have decreased. More importance is being placed on vineyard specific wines. Blocking of malolactic adding more elegance and length. Finally Eric has refurbished his cellars and cuverie, with modern stainless steel tanks and much more barrel storage.

Eric also sell some of his grapes to a big house. He still believes that the big houses do much of the marketing to promote the ‘brand Champagne’ and hence need some quality grapes to help maintain the prestige nature of champagne as a sparkling wine. Certainly Eric is a master of blending but he has realised that the expression of vintage individual small parcel terroir can be equally rewarding and satisfying. For the moment he has no standard vintage wine available. All of Erics’s vintage wines are now more single parcel dominant with longer lees aging and lower dosage non-malo. We have tasted some early disgorged samples of Eric’s new single vineyard 2012 vintage champagnes. Amazing intensity and purity. Very young still and for release next year. He will have three wines, a Genettes Chardonnay and Pinot from Les Beurys and Les Fournettes.

Ambonnay terroir is a conundrum in the region. Next door to Bouzy we would think that it shares some of Bouzy smoky rich flamboyant characteristics. But no. Bouzy is south facing and Ambonnay exposure moves around the montagne more south-east and east with a slightly deeper silex-clay top soil over deep chalk with more undulations and nuances. The end result is less fruity more mineral wines. Eric now ranks as maybe the best sustainable vigneron in Grand Cru Ambonnay, alongside Egly-Ouriet, Benoit Marguet and Marie-Noelle Ledru. It is interesting to note that Bouzy/Ambonnay soil type is rated at 93% chalk, the highest of any Champagne region. Eric’s wines are not cheap but in the scheme of other super star growers in Ambonnay, they are a bargain. Eric’s journey thru biodynamic viticulture means that his is making marginally better wines than he did 5 years ago, so we see the quality across the range slowly increase to dizzier heights. 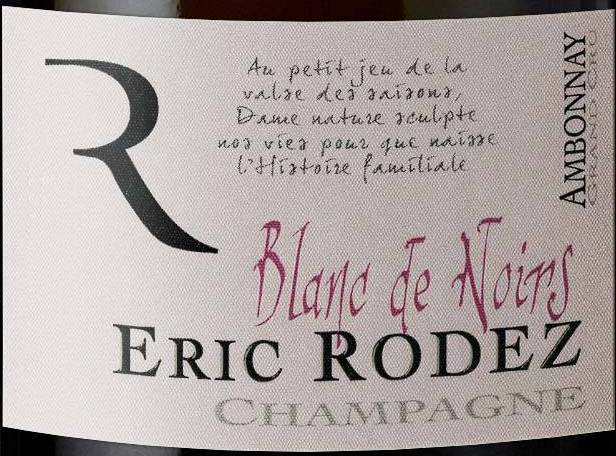 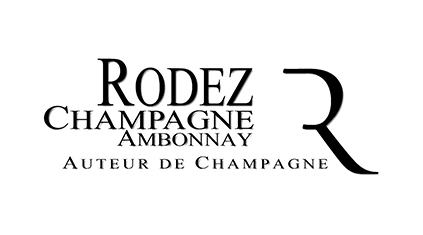 Champagne Eric Rodez Rosé        $125.00
24% Chardonnay, 30% Pinot Noir, 46% Pinot Noir of maceration. Average vine age – 36 years. Blend of 2013 – 42%, 2012 – 18%, 2011 – 18%, 2010 – 9%, 2009- 8%, 2008 – 5%. Tank for 10%, barrels 90%. Partial malolactic fermentation (with malo 25%, without malo 75%). Dosage 4.5 gr. Here we see Eric’s skills at work. This is a blended saignée rosé which also uses Chardonnay and Pinot in the blend. By using a mix of both techniques Eric has greater control over the color and extraction in the final blend – aiming for more consistency from year to year. The oak adds a subtle savory sherbet overtone which I really enjoy in pinks. Citrus and minerals in abundance with classic sour cherry. Eric does not make much of this – rare. VERY LIMITED
Champagne Eric Rodez Zero      $135.00
30% Chardonnay, 70% Pinot Noir. Average vine age – 39 years. Blend of 2010 – 48%, 2009 – 25%, 2008 – 16%, 2006 – 8%, 2005 – 3%. Tank for 5%, barrels 95%. Partial malolactic fermentation (with malo 25% and without 75%). Dosage 0 gr. Really pristine, pure and precise. Hugely linear and mineral – hints of white fruits all entwined in chalky minerality.  VERY LIMITED
Champagne Eric Rodez Grand Vintages     $171.00
30% Chardonnay, 70% Pinot Noir. Average vine age – 39 years. Blend of 2009 – 26%, 2008 – 28%, 2006 -14%, 2005 – 11%, 2004 – 10%, 2002 – 11%. 100% barrel fermentation. No malolactic fermentation. Dosage 3 gr. This is the ultimate expression of Eric’s admiration and understanding of his work at Krug. A stellar range of the best reserve wines (2008 makes up 28%) make up a complex expression of old vines Ambonnay terroir. Here we have a food wine – complex and savory with smoke and walnut overtones. Hints of apricot and minerals. Almost liqueur like intensity and weight.  VERY VERY LIMITED
Champagne Eric Rodez Les Beurys Les Secs 2008    $260.00
100% Pinot Noir. 100% barrel fermentation. No malolactic fermentation. 95% Les Beurys, 5% Les Secs.Dosage 2 gr. From mid-slope south east exposure vineyards. This 2008 from Eric and the 2008 from Frederic Miniere are my two absolute standouts from the 2008 vintage.
“Rodez held this in the cellar longer than his 2009s and 2010s due to the concentration and structure of the 2008 vintage, releasing it in early 2018. In fact this was supposed to be a single-vineyard Les Beurys: “There were four cases of Les Secs, about 170 kilograms of grapes, that were accidentally put into the press along with Les Beurys,” says Rodez. “It didn’t really matter that much, but I wanted to be honest, so I put Les Secs on the label as well.” His parcel of Les Secs lies just 150 meters away from Les Beurys, but here the soil is even poorer, and the slope turns slightly to the southeast. How much it contributes to the overall character is impossible to say, but what’s certain is that this is a stunning wine, demonstrating the succulent purity and elegant finesse of the terroir as well as the sophistication and grandeur of its vintage. It’s long and tense on the palate, with a racy energy and vibrant depth of fruit, and it finishes with excellent length and complexity, underlined by prominently chalky notes of soil. This is outstanding, and it should only gain in expression with further aging.” Rating 3/3 Stars (Highest Class), Peter Liem . VERY VERY LIMITED
We use cookies on our website to give you the most relevant experience by remembering your preferences and repeat visits. By clicking “Accept”, you consent to the use of ALL the cookies.
Cookie settingsACCEPT
Privacy & Cookies Policy

This website uses cookies to improve your experience while you navigate through the website. Out of these cookies, the cookies that are categorized as necessary are stored on your browser as they are essential for the working of basic functionalities of the website. We also use third-party cookies that help us analyze and understand how you use this website. These cookies will be stored in your browser only with your consent. You also have the option to opt-out of these cookies. But opting out of some of these cookies may have an effect on your browsing experience.
Necessary Always Enabled
Necessary cookies are absolutely essential for the website to function properly. This category only includes cookies that ensures basic functionalities and security features of the website. These cookies do not store any personal information.
Non-necessary
Any cookies that may not be particularly necessary for the website to function and is used specifically to collect user personal data via analytics, ads, other embedded contents are termed as non-necessary cookies. It is mandatory to procure user consent prior to running these cookies on your website.
SAVE & ACCEPT